John Rajaee was admitted to the California Bar in 2008, and before he was an accident attorney, he began his career working as a defense lawyer representing large corporations.

Although John was very successful in the corporate law arena, he grew to believe that the human element was missing from his work, so he made a drastic change to plaintiff’s personal injury law. Since then, John has devoted his heart and soul to representing seriously injured victims of car crashes, truck wrecks, dog bites, traumatic brain injuries, spinal cord injuries, and other accident victims who truly need his help, rather than deep-pocketed companies that are simply looking to protect their reputations and wallets.

Of course, John’s background on the defense side is now his secret weapon, and more often than not in a mediation or settlement discussion, John leverages his vast knowledge of the defense’s motivations and weaknesses to get his clients the high dollar value personal injury settlements they deserve.

John is renowned for his compassionate and friendly approach towards his clients, and his goal is always to answer every question a client poses in a helpful and respectful manner – it is never to end a call or a meeting as fast as possible. His human approach to client relations has earned him many glowing testimonials, and John has also been awarded the prestigious Avvo Clients’ Choice Award for his consistently high ratings among clients.

John’s undergraduate education was at UC Riverside, where he earned a bachelor’s degree in Political Science. Following this, he earned his Juris Doctor at the Whittier College School of Law in Orange County, where he participated in numerous regional mock trial competitions with great success. Since obtaining his law degree, John has made it his mission to serve the local community through charity work, including contributions to the International Society for Children with Cancer.

He currently resides in Rancho Santa Margarita, and he is an avid car buff and motorcycle rider. These pursuits help him to connect with victims of auto and motorcycle accidents which he passionately represents in his practice. 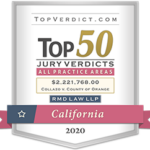