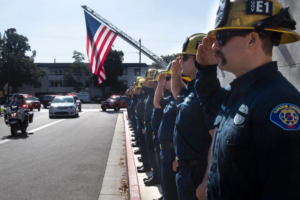 Mission Viejo, CALIFORNIA – According to reporting from the OCRegister, off-duty fire captain Mike Kreza died shortly after he was struck by a driver in Mission Viejo on November 4th.

Mike Kreza, 44, was training for an upcoming Ironman on his bicycle when he was struck by a driver around 8am Saturday. The collision occurred on Alicia Parkway near Via Burgos. Kreza was rushed to the hospital in critical condition, but died early Monday morning.

According to the Orange County Sheriff’s Department, the driver of the vehicle possessed multiple prescription medications and was arrested at the scene on suspicion of driving under the influence.  He was booked into the Orange County Jail with bail set at $100,000.

Mike Kreza is survived by his wife and 3 daughters.

Unfortunately, pedestrian accidents remain far too common in Orange County and throughout the state of California. A comprehensive report released last year by the National Highway Traffic Safety Administration found that thousands of pedestrians are injured in crashes in the state each year.